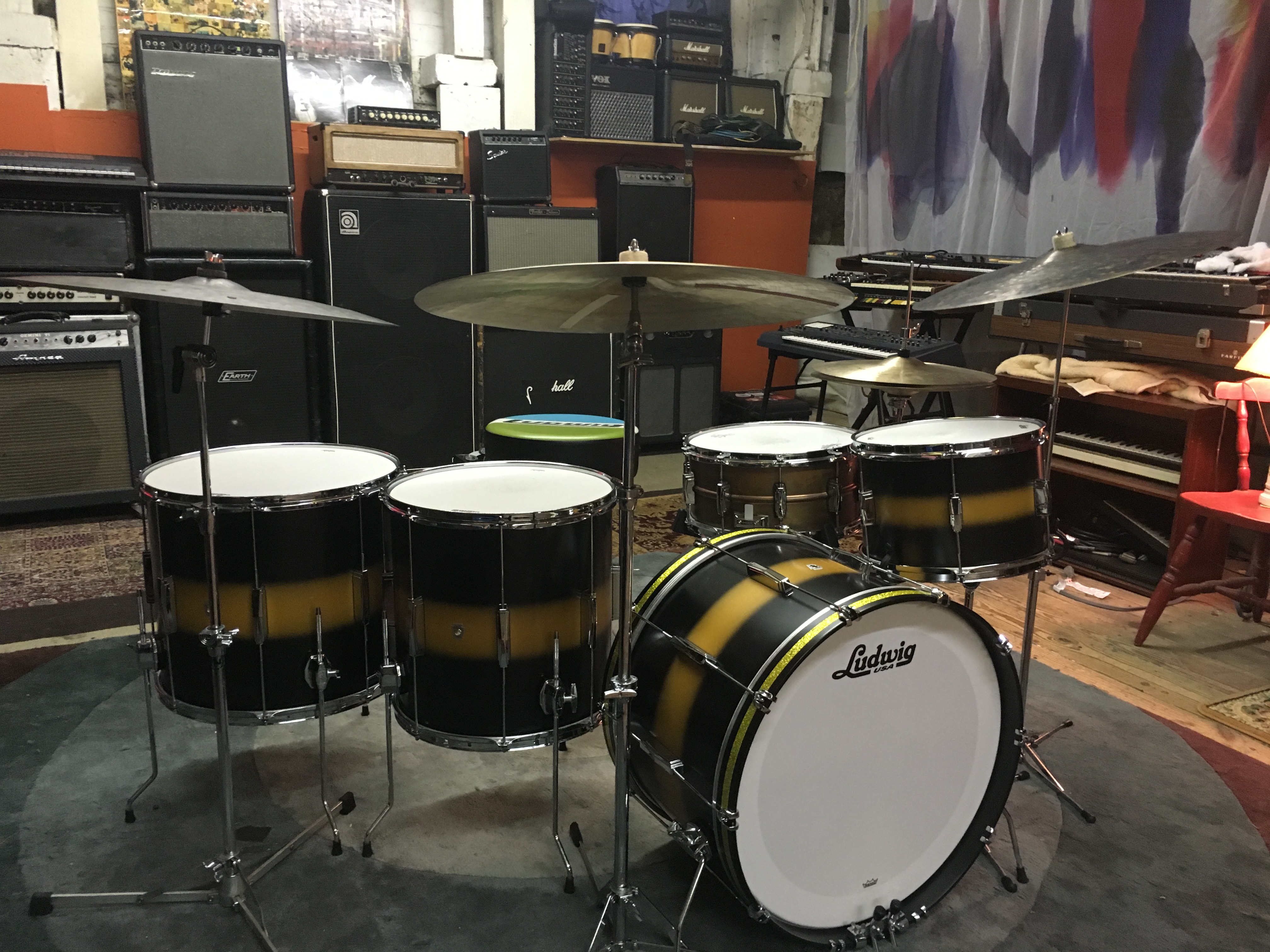 There’s something special about these drums. A strange thing happened when I took the bass drum out of the box – I unwrapped it from the plastic, felt the head tension with my fingers, and hit it a few times and set it right up. I literally did not change a thing. THE THING SOUNDS LIKE A GODDAMN CANNON. I wish I could tell you that I painstakingly tuned it and got it exactly where I wanted it and BANG. But no. Just as I did with a prototype last summer in that I got to have a go with in Chicago with the Ludwig team, this thing came out of the box ready to go with a warm, thunderous punch. No padding, no felt, no muffler. Now, I’m sure there will be a time when I need to get a different sound and will pad it up or maybe add a couple felt strips, but until that time, this thing is gonna roll deep with just the clear Remo PS4 batter and Ludwig resonant head (which has a plastic internal ring). I had a set of Coated Emperors ready to throw onto the kit when it arrived, but upon hearing the richness of tone and the crisp attack from the stock Coated Ambassadors, I decided to wait. Thanks to the kind tutelage of my main man Simon at Professional Drum Shop in Hollywood, I’ve come around full circle to really understand that there’s a reason why the Coated Ambassador is the industry standard. If you need to kill overtones for a given situation, there are countless ways to do so, but there’s an attack that you will only get from a single ply which gets lost any time you start adding plies and oil. It’s easy to forget sometimes that there is a reason why things become a given, the norm. Snare drums sound great with Coated Ambassadors. End of story. And the quality and craftsmanship of Remo heads is truly unsurpassed, it’s only right that Ludwigs would come stocked with Remo heads. But I digress


These drums sound MASSIVE. Really, truly massive. And you know what else? They’re light as hell. I think there’s something about the relationship of the weight of the shell coupled with the fact that these single Imperial lugs are less intrusive, allowing for maximum resonance. It’s really a perfect balance. More on this in a minute.

There’s a thing about musical instruments. It’s that we want them to inspire something in ourselves or in our playing. In a new instrument one can find the inspiration to approach things in a new way or reach deep and find a new way of expressing oneself. Do I need another drum set? Probably not. (Ask my wife.) Does (The War On Drugs’ singer/lead guitar player) Adam Granduciel need another Jazzmaster? Probably not. But out of that new guitar, new inspiration might come and three new songs might just flow. Out of that new kit, a new way of approaching time and space might get unlocked and make you a better player. Our relationships with musical instruments are at once relationships of utility and of aesthetics. They can also be filled with sense of almost child-like wonder. We can admire how they look and how they sound, and also enjoy the feelings that they conjure, even the way they smell. And smell is a very powerful sense – it triggers memories and emotion. I still remember the way my first kit – ’65 Ludwig champagne sparkles – smelled. And I remember playing “Pictures of Lily” in my room as a seven year-old and way the wool of the rug smelled combined with the smell of those shells. The Telecaster I got for Christmas in 1988 still smells exactly the same whenever I open that case. And I remember learning U2 “Bad” with a delay pedal as a 14 year-old. How about cars? Anyone remember the smell of a 70s Volkswagen bug? Again, I digress. 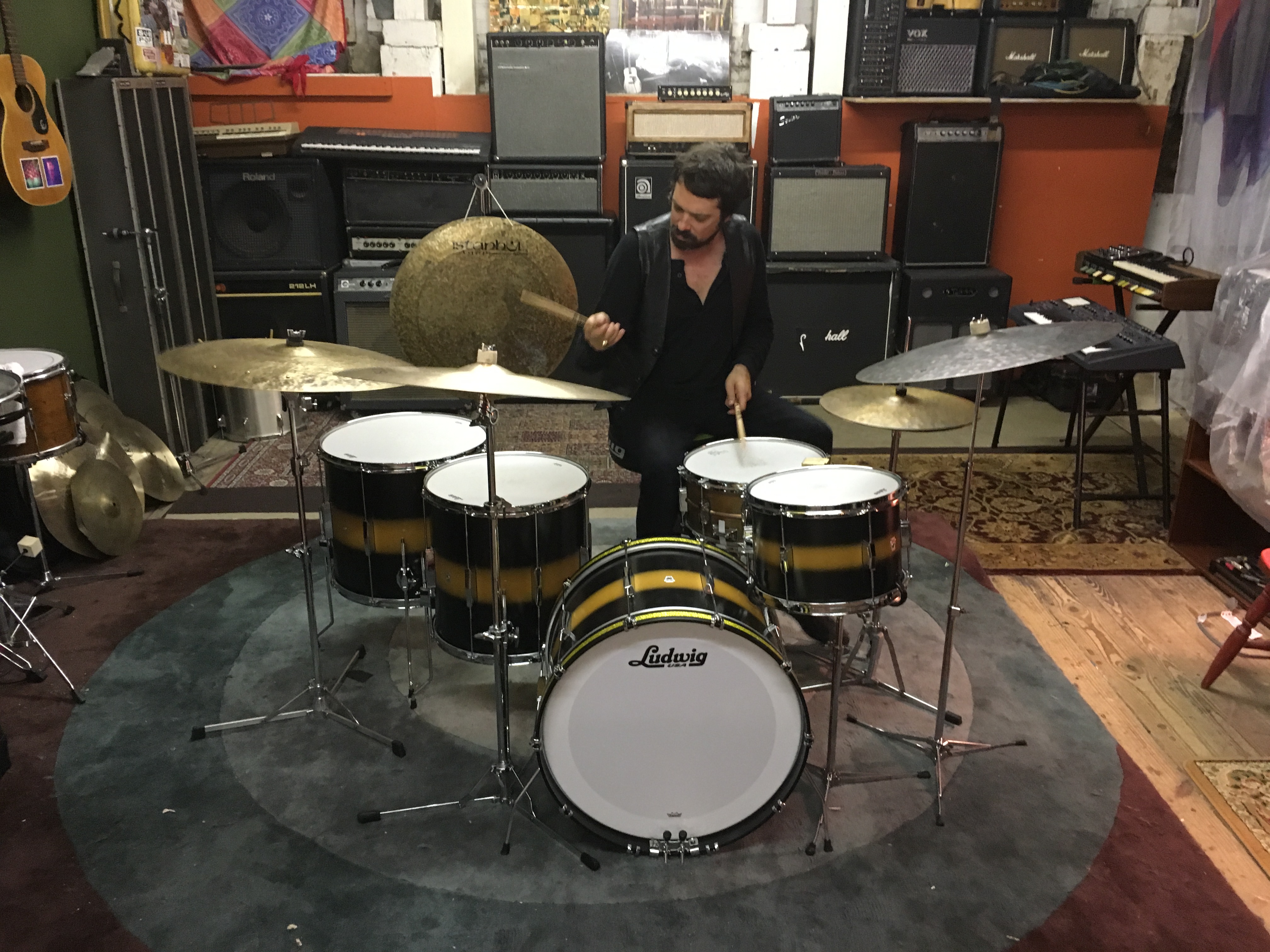 But the point is - instruments and their craftsmanship and their aura are meant to inspire us. And these Club Dates are full of vibe. In addition to just simply wanting to play it all the time, this kit has inspired me to approach tuning in a new way. I tuned them up first as I’m accustomed to, which meant finding that sweet spot on the lower end of things on the top heads, for a nice deep (yet still tonal) thud. But then something happened. I got curious. What if I explore the higher end of the range of these drums? What if I tune the top and bottom heads in unison? Well, guess what? They’re musical. And the way the head responds to being struck affects the rebound of the stick, so now I’m playing differently. And I’m using these drums when I might’ve normally used my smaller down beat configuration in a live (and very loud) fusion type of setting as well as in the studio for a big, warm rock sound. These seven plies of maple and poplar (two maple, three poplar, two maple) project round and warm. A poplar sandwich with maple buns, similar to the Classics of yore. I’ll probably always favor my 18” or 20” kick if I’m playing more traditional jazz, but other than that, I can’t imagine a scenario in which this kit wouldn’t totally rule. By the way, there’s a 14”x18” bass drum available as a component, so basically Ludwig has totally got everything covered with this series.

And, let’s be totally honest here. These drums look incredible. The lines on the duco finish are a thing of beauty, and are clearly the result of much care and precision. The matte finish (with just a hint of glitter mixed into that gold) give the drums a gorgeous vintage look and feel. Very authentic. The price point on these drums is particularly remarkable, given the amount of time that goes into making them, right here in Monroe, NC no less. Looking at all the different finishes and wraps offered, there’s literally something for everyone. The red and blue strata wraps are a welcome nod to the old Ludwig Standard line. And Ludwig has totally nailed the finishing touches with the hardware. I’m especially pleased with the return of the Classic Folding Spurs on the bass drum. These spurs first appeared in 1962, and can be seen on most of Ludwig’s well recognized kits of the ‘60s. The return of the Long Imperial lug is probably the most talked-about feature, and rightfully so. Their slight Chrysler Building-esque art deco nature is subtle yet pronounced. The lug made its debut on Ludwig’s top of the line bass drums around 1937, but this is the first time to have ever been featured on floor toms in true Club Date fashion. This, along with the use of the Low Mass Die-Cast Claw (developed in 2012 for USA Maple drums, and totally perfect on the Club Dates) contributes to the overall light weight and resonance of these drums. I bought Atlas Classic Bags for these things and can literally carry the entire kit at once. (Hardware and cymbals are a second trip, but who’s counting.)

The Club Date model was introduced in 1949 and went on as a popular configuration into the ‘70s. If you are looking for an easy to transport kit with killer tone and super classy vintage swagger, look no further. It’s right here. The new Ludwig Club Date USA series.